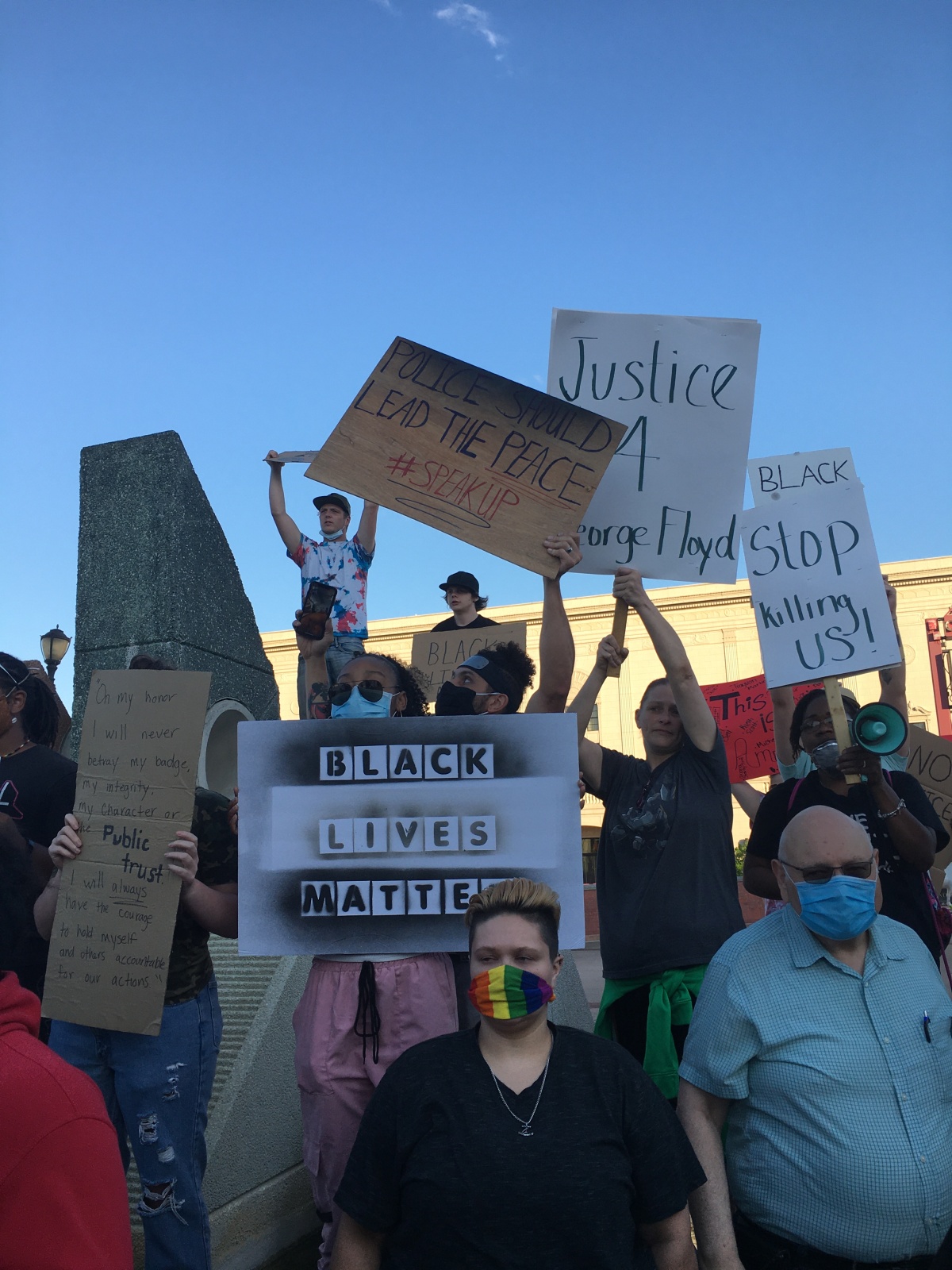 When I walked up to a local protest in Northern Indiana with a friend by my side, signs in our hands, and masks rubbing against our faces, I didn’t know what to expect. I had read the posts, seen the pictures, and watched the videos of protests turning into “riots” while police reacted in ways that made me sick. I had also seen the brighter side, with people truly coming together and officers joining in and embarking this movement for freedom with the people. The world seemed to be working in levels of extreme. Which extreme was I getting myself into?

As we walked up to join the protestors, our first instinct was to look for the cops. Were they in riot gear? Were they surrounding us? What weapons did they have? We were lucky, though. Among the relatively small crowd we were in, there were only a handful of police officers, including the chief of police and the county mayor. It was later said that each officer in the crowd was there on their own accord and protesting with us (although they never chanted, held a sign, or actively participated). Their relaxed presence was appreciated nonetheless.

The protest lasted two hours and was full of friendly faces chanting things like “Black Lives Matter” and “No justice, no peace, convict the police.” No curses were made. No fires were started. No property was damaged. It was, all in all, a peaceful protest. I can say with full confidence that many protests have run their course in the same manner. So why is it that in the midst of each peaceful protest, the violent ones seem to be all we hear? Or why do protests that are meant to be peaceful become violent? The answer is simple: because that’s how effective protests work.

When looking at the looting and the fires, people tend to react with exclamations of “What would Martin Luther King Jr. think of all this?!” or “Gandhi never achieved peace through violence!” There’s even the occassional “Rioting never accomplishes anything!” comment that spurs from the mouths of others. And while these comments and questions are understandable given the circumstance, they highlight the lack of proper historical education and the ways in which history (particularly peace history) has been whitewashed and glorified to look like change occured through a utopia of nonviolence.

None of this is to say that some of the historical leaders we glorify weren’t persistant advocates of peace, but rather what they did was not necessarily as peaceful as we have been taught. Take Gandhi for example: he is most known for being an ex-lawyer who convinced a country of people to stand against British control and salt tax while marching peacefully to the Arabian seacoast. And while Gandhi believed in Satyagraha, or peaceful resistance, he also believed cowardice was worse than violence. He taught his followers not to fight back if they can help it: if an officer beats them with a baton, take the hit. If you are handcuffed and arrested, go peacefully. But if the only choices you face while someone is encountering injustice are fighting with violence or running away in avoidance, you are worse off for running away a coward. It takes more strength to use non-violence, he believed, but “Cowardice is impotence worse than violence.”

Martin Luther King Jr. was another iconic peaceful leader who stood on the front lines of the Civil Rights Movement and promoted nonviolence in order to create change. But if you think violence was never on the agenda, think again. One of King’s greatest tactics was invoking the violence of the oppressors in order to create awareness in the public. He trained his followers to withstand all sorts of violence, making it known to each of them that they will get beat, hosed, abused, and arrested, but it will not be in vain. The harm done to them would be advertised and televised so those in denial or unaware of the harm being done to African Americans would see for themselves what the fight was really about and how deep the racist blood ran. The Civil Rights movement went so far as to send children to the front lines of the protests, so when word got out about kids being abused and arrested by police officers, the hearts of America would hurt for the unjust treatment of it’s people and they would finally take a stand. King didn’t want the protestors to be violent, but his revolution revolved around the violent nature of those they were protesting against, particularly the police… sound familiar?

In King’s Letter From a Birmingham Jail, he answered questions and explained incidents that are uncanny in their relation to today’s events. One passage explains his response to people “commending” the police officers for their bravery and actions during protests in efforts to keep the peace. This was King’s response:

Letter From a Birmingham Jail

Replace “dogs sinking their teeth” with “police spraying pepper spray and tasing from point blank,” and you can paint the exact same picture with a different time stamp. King goes on to say that rather than commend the police officers, commend the protestors. The people who are risking their own freedom and well-being to fight for a greater cause. The individuals who are truly practicing non-violence by sitting on the frontlines of the protests without inciting harm to anyone around them. The individuals who are being thrown in jail, pepper sprayed, tased, pushed around and beaten all while not raising a hand, but rather, raising their voices – those are the people you should honor.

To continue the discussion and go beyond the historic leaders who have stood up against unjust treatments (if you want to continue learning about that topic, look into people such as Socrates… or Jesus), it would be beneficial to discuss peace as a whole. Those who are partaking in protests, whether it is directly or indirectly, are fighting for positive peace. Those who are not, are likely condoning negative peace. The difference? Negative peace is the absense of direct or physical violence; positive peace is the presense of justice. If you feel as if negative peace has always been present or you’re comfortable with it being around, you are likely priveledged and living in a shadowed world. You are okay with negative peace because you do not face the same oppression so many others deal with regularly. As long as there is order, you are happy. But what do you do if there is order in unjust ways? Order simply implies tolerance and acceptance, but it’s not synonymous with something being right. You shouldn’t settle for negative peace – you should strive for positive peace. And the only way to create positive peace is through creating disorder. Tension needs to be created for a positive peace to occur. When talking about these two types of peace and the order/disorder they cause, King said the following:

Actually, we who engage in nonviolent direct action are not the creators of tension. We merely bring to the surface the hidden tension that is already alive. We bring it out in the open, where it can be seen and dealt with. Like a boil that can never be cured so long as it is covered up but must be opened with all its ugliness to the natural medicines of air and light, injustice must be exposed, with all the tension its exposure creates, to the light of human conscience and the air of national opinion before it can be cured.

Just like you would do when cleaning a house – you must trash it first, then sort through the filth before it can be clean. If you hide trash in the pantries and dirt under the rugs you do not have a clean house but a dirty house that looks clean. Many people see America as a dirty country that looks clean. We have swept the crimes and dangers of others’ actions under the rugs of this country for so long that generations who weren’t around for the original crimes are now feeling the weight of cleaning up the mess. So what do people do? They sweep it out, dump it out, get it in the open so it is seen and acknowledged and then get to work.

The “riots” that are sweeping the nation are merely a response of centuries of built up anger and aggression towards a system that was built on the backs of the abused. The civil unrest is not random or surprising, but a natural response to the ever-so-present abuse. When protestors are peaceful but police are not, a riot occurs. When negotiating is attempted but no voices are heard, yelling ensues. When begging and crying and pleading is ignored, demanding and taking are the options that remain. After all, don’t they say that if you want something done well you’ll have to do it yourself? The people of America are tired of asking for equal treatment regardless of race, nationality, or even status. They are tired of demanding that cops be held to the same standard as the people; that presidents be held to the same standard as the people; that the rich be held to the same standard as the people. You can only have citizens obeying laws that others break freely with little-to-no consequence for so long before you have an uprising. You can only have negative peace for so long before the water boils over and positive peace is demanded.

History is riddled with masses causing an uprising to combat what is seen as unjust. Our freedoms were gained by it. Our indepence was gained by it. And now, until those in power take action and move towards justice, the people will not stop. Martin Luther King Jr. would not be ashamed of the protestors, he would be ashamed of the fact that we are still protesting the cause he died for. Gandhi would not ridicule the methods, he would ridicule the country that has failed its people. Violence may not be the answer, but giving criminals power and locking up innocent people isn’t the answer either.

That doesn’t mean violence is justified, but if you want to know how to handle the violence of protestors, the best preventative measure would be handling the violence of the oppressors.

My name is Erin and I like all things beautiful - beautiful art, beautiful music, beautiful writing, etc. I like to write because as much as I enjoy talking, I can be pretty lousy at it. I'm currently attending college in small-town Indiana while involved in a full-time job of daydreaming with some writing on the side. You'll find that most of my writing will have some sort of advice or positive encouragement, but I write like that because I believe the world is full of too much negative news that I don't want to contribute to - I want to be a spreader of good news. So that's what I'm here for. I'm here as a believer of good things, a lover of all things beautiful, and a spreader of joy. View all posts by erinelixabeth

3 thoughts on “We aren’t just writing history, we’re re-writing it.”

Goal Settings Strategies: How to Succeed